We love stories about people who work hard to accomplish their goals, practice relentlessly to attain mastery push through physical pain to win.

It’s human nature to admire the upper limits of achievement. It offers all of us an inspiring perspective on our potential.

But there’s a downside to uncompromising drive and determination. It comes with mental, emotional, and physical tolls.

Those downsides made headlines recently when Simone Biles, the world’s best gymnast, pulled out of Olympic all-around competition. Before that, tennis star Naomi Osaka dropped out of the French Open. Both Biles and Osaka cited mental health as the reason for their about faces. And both have been criticized for their decisions.

The Wisdom of Quitting

Sometimes the wise decision isn’t to go ahead. It’s to slow down or stop altogether. And sometimes, it’s not only okay to walk away, it’s also necessary.

As most of the world now knows, Biles dropped out of the Olympics after a shaky vault, saying she wasn’t in the right mindset. Gymnasts have a word for that. They call it the “twisties” – a state in which muscle memory and the mind-body connection fail you. Suddenly, you’re in mid-air, and you have no idea how to land. The twisties are potentially life-threatening. And Biles knew what was physically at stake for her if she toughed it out.

If we’re mindful, we too can know what’s at stake for us if we push ourselves beyond our limits. We can tune into what our minds and bodies are telling us in any given moment or phase of our lives and know when enough is enough for us.

The Power of Kind Attention

Knowing our breaking point takes kind and discerning attention as well as the courage to say no. Life is nuanced and each situation is different.

Sometimes we need to bear down and put in more effort – whether it’s in our meditation practice, a job, a relationship, or personal pursuit. It’s also meaningful to persevere and grow through difficulty.

But at other times, easing up, modifying our approach, or quitting is prudent. Not all difficulties are avenues for personal growth. Some are just stressful and damaging.

Bringing mindfulness to our conditioned patterns can help us strike that ever-changing, just-right level of effort and fortitude.

As recovering over-achiever, I tend to bear down and put in more effort. But mindfulness and age have weathered those sometimes stressful impulses. I’ve gotten far better at modifying my approach when needed and prioritizing wellbeing and joy. I’ve also become a quitter in the best sense of the word.

A small example: A couple of years ago, after recovering from two hip surgeries, I decided to volunteer at a local hospital on the orthopedic wing as a patient care worker. I thought my experience might benefit others.

Getting cleared for the gig took hours of training along with a commitment to a weekly shift. I came to work eager and ready. But within several weeks, I was bored out of my skull. After completing my assigned tasks early in my shift, I spent the rest of my time self-consciously loitering around hospital halls. Lobbying staff for more ways to be more helpful proved unsuccessful. So, I quit, trusting that someone else would be a better fit.

Quitting isn’t always an option and I’m not suggesting people thoughtlessly shirk responsibility. But maybe because of Biles and Osaka, more athletes, along with the rest of us, will prioritize our mental, emotional, and physical health and even our happiness when it feels right to do so.

Cats always know when enough is enough – even when we want them to put in more effort.

All cats, and especially 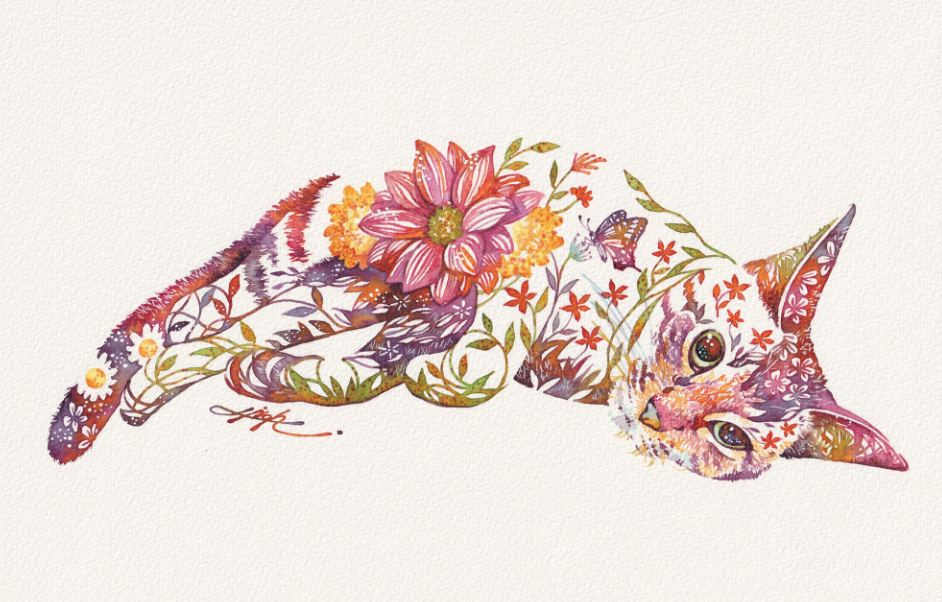 my own 20-year-old feline named Peter, remind me that taking a break is often better than pushing through beyond my limits. (That’s probably one of the reasons why Peter has lived so long.)

Japanese-based artist Hiroki Takeda celebrates the beauty and ease of cats with his playful watercolors that combine plants with the feline form.

Enjoy more of his drawings and become inspired to take a break whenever you need to by clicking here.